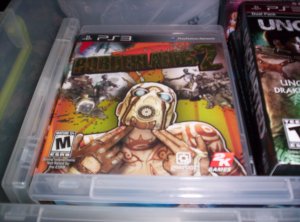 I’ve been playing Borderlands 2 for the PS3 on and off for the past several months. My experience with playing this game has been a bit weird, since I have a little bit of a love/hate relationship with the game (haha!).

I really enjoyed playing the original Borderlands. It’s one of my favorite games in the past videogame generation. In fact, in the first 20 hours or so of playing Borderlands, I was extremely addicted to it. However, by the time I got near the end of the game, I was getting a bit tired of it. One of the reasons for this is that Borderlands lacked a compelling story to make me want to keep playing the game. I felt I had no motivation to beat the game, other than the fact that I wanted to beat every game I play.

As for Borderlands 2, well, developer Gearbox did address one of the biggest criticisms of the first game by putting in a good story. Add in the fact that the game was universally praised by game critics and game journalists, and a lot of my gamer friends are saying that Borderlands 2 is one of their favorite games of the previous generation. Well, all this really made me extremely hyped and excited for Borderlands 2.

So why is it that I did not really enjoy playing Borderlands 2 when I first started playing it?

First of all, I found Borderlands 2 to be much harder than the first game. Or rather, it is so much easier to die in Borderlands 2. The game has some really annoying enemies, including the bullymongs, which are the first enemies you encounter in the game. The first game eased you into combat at the beginning by having you fight skags and low level bandits. The bullymongs here in the second game are just so freaking annoying as they keep jumping around and throwing stuff at you.

As I stated above, it’s extremely easy to die in Borderlands 2. This is where the “hate” part of the love/hate thing comes in. I would enter a battle, and I’m doing really well, and then, seemingly out of nowhere, I get hit with a very strong attack or a quick series of strong attacks, and I die. Therefore I have felt extremely underpowered throughout most of my playthrough. Leveling up does help but when fighting some lower leveled enemies, I still get an unexpected death or two. Naturally, this frustrated the heck out of me and made me want to quit playing the game several times.

Sure, if you want to say that the reason I keep dying is that I’m terrible at the game then that’s fair enough.

Another reason why I might be having a hard time is that I am playing as Zer0 the Assassin. I chose my character based on looks rather than their skills. Zer0’s skills are that of a sniper, which isn’t really my preferred style of play. Perhaps if I had played as Axton the Commando, with his automated turret, I would have had an easier time with the gun fights.

I also reached a boss early on that was around the same level as I was and I just could not beat him. I was doing very little damage to him and his shield recharged at such a fast rate that I could not even bring it down before running out of ammo. Man, I thought that this guy was unbeatable even if I leveled up. I almost quit playing the game for good at this point, because I thought that there was no way I could beat him.

But I decided to go ahead and grind to level up a few times. This helped a lot and I did managed to beat this boss.

So despite wanting to quit several times, I’m glad I continued on with the game, because there are some things that I do like about the game. As I mentioned above, the Borderlands 2 does have a good story. I haven’t beaten the game yet, but the story does make me want to see it through to the end.

The game has some great characters as well. I was glad to see some familiar faces from the original game. And some of the new characters are really cool, especially Tiny Tina. The main villain, Handsome Jack, is an awesome character!

Speaking of familiar faces, you do meet the original 4 vault hunters from the first game (you played as those characters in the first game) and this time they’re NPCs. I wasn’t sure if I would like how they would use these 4 characters in Borderlands 2, but everything worked out well and I ended up liking them as NPCs.

I also like the humor in the game. Claptrap is funny, as always. The game has some very cool pop culture spoofs. I really got a kick out of a side mission that had you delivering pizza to some familiar sewer dwellers.