For this round of pickups I’m showing four RPGs I bought last summer. Three of these games are from Best Buy and the fourth one is from Amazon. These games are: Tales of Symphonia Chronicles (PS3), Time and Eternity (PS3), Final Fantasy X/X-2 HD Remaster (PS3), and Paper Mario Sticker Star (3DS). 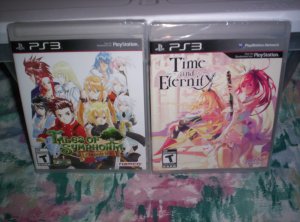 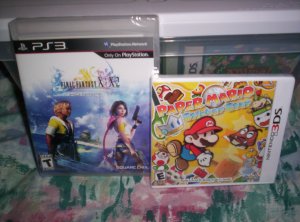 At that time during the summer, most Best Buy shops had Tales of Symphonia Chronicles for $29.99, but at this one particular Best Buy the game was $21. The price of this game was not displayed anywhere though – not on the cover and not on the PS3 videogames shelf where I found the game. I had to get a store employee to scan the game for me to get the price. For $21 I knew I had to get this game.

While I am not the biggest fan of Final Fantasy X when I played it on the PS2 (in fact it took me long awhile to get into this game), I did end up liking the game. I’m not looking forward to blitzball though (haha!). I’ve never played Final Fantasy X-2 so here’s my chance to check out this game.

Most stores have Paper Mario Sticker Star for $39.99, but this Best Buy had the game discounted to $32, so I decided to pick it up. I’ve been a fan of the Paper Mario games since the first game (on the N64) so I can’t wait to get into this one.

And finally I got Time and Eternity for $26 from Amazon. This is a game that I have never seen in my local stores. In fact, when the game was first released, I went looking for this game in several stores and none of the store employees had even heard of this game. The digital version of this game has been on sale several times on the PSN store. I thought about getting it when the PSN store had it for $19.99 but at 13.5 GB the game takes up way too much hard drive space! When I saw it for $26 at Amazon I decided to get it.

I’ve heard mixed things about Time and Eternity. It got some pretty bad and pretty average reviews, but just about every RPG gamer I’ve talked to say that it’s better than the reviews say it is. So I’m curious to check this game out.