Videogames I plan on playing in February 2013 (Dead Island GOTY, Dead Rising 2: Off The Record, etc…)

Ah, the month of February – love is in the air. So of course it’s only natural that in February I plan on playing videogames…

… with zombies in them (haha!)

Yes, two of the games that I’m planning on playing have the word “dead” in the title. These two games are Dead Island: Game of the Year edition and Dead Rising 2: Off The Record. Two more games I want to play are Need For Speed The Run (Limited Edition) and Red Faction: Armageddon. All four of these games are for the PS3. 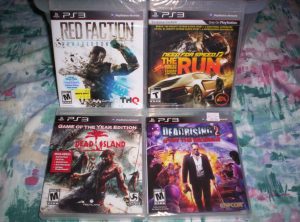 I don’t know very much about Dead Island, but I believe the game got pretty much good reviews across the board. I have heard some gamers say good things about the game and I do like zombie games, so I think I will enjoy it a lot. I picked up this Dead Island: Game of the Year edition for about $19.99 at Best Buy last fall, and I thought it was a pretty good deal for the game, especially since it comes with the DLC packs (although I’m not sure if the DLC is on disc or needs to downloaded, but I guess I’ll find out soon).

On my Xbox 360, I’ll probably continue to play Borderlands: Game of the Year Edition, which I started playing last month. I’m about halfway through the main game (I think). I did play and beat two of the DLCs. I beat The Zombie Island of Dr. Ned and Claptrap’s New Robot Revolution. The next piece of DLC I’ll play is probably The Secret Armory of General Knox.