Happy Holidays everyone! Remember how I said in my earlier “DVD/Blu-Ray Pickups” blog posts that someday I’ll start buying more blu-rays. Well, that day has come sooner than later. I have just bought a few blu-rays. But despite this, I’ll probably still be buying more DVDs than blu-rays in the near future, since DVDs are still significantly cheaper than blu-rays.

Last week (which was the week before Christmas) I was out shopping with my brother and we went to a Best Buy. By this point I was pretty much finished with my Christmas shopping. So I almost left that store without buying anything. The keyword here is “almost”.

I was walking towards the entrance of the store in order to leave the store and that’s when my brother stopped me. Near the checkout section with the cashiers, he had noticed they had a put out a shelf with tv show blu-rays. These blu-rays were on sale at great discounts. He wanted to look at them for a little while before we left the store.

So I looked at that shelf of tv show blu-rays with him, and that’s when I saw that they had Dexter Season 1-5 blu-rays on sale, with each season set discounted to $20. I had wanted to get Dexter on DVD or blu-ray for the longest time, but I rarely found any of the season sets on sale for $20.

So I couldn’t resist. I decided to buy all 5 seasons of Dexter on blu-ray! 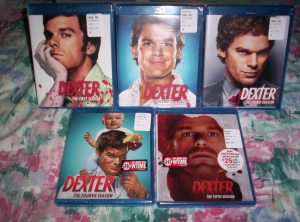 I’ve actually already watched the first season of Dexter, and I absolutely loved it! Season 1 is still pretty fresh in my mind, so when I start watching these Dexter blu-rays, I’ll probably start with Season 2.

I bought these next two blu-rays for my, um, younger sister.

I have wanted to get Season 1 of The Vampire Diaries for a few months now. I’ve heard good things (from guys too, haha) about this show.

Just to think, if my brother hadn’t stopped me from leaving that Best Buy, I wouldn’t have bought these blu-rays…