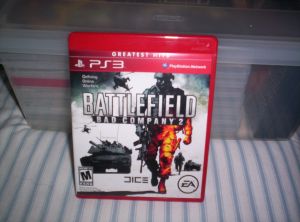 A unique thing about the original Battlefield: Bad Company is that in the single player campaign, you have these huge maps to play through on each level, which makes the game feel more like an open world shooter, even though you are still pretty much going down a linear path. However, because the maps are so big you can approach your objectives from different directions. I felt this style of play was refreshing and a nice change of pace from other FPS. It also helps that Battlefield: Bad Company has really tight controls (except when you’re driving a vehicle or flying a helicopter).

The online multiplayer in Battlefield: Bad Company also has huge maps (although there are smaller maps as well). These huge maps meant that sometimes it would take you a long while to bump into a human opponent, but I liked this, since it also meant that I wouldn’t be killed every 3-5 seconds every time I respawned.

Anyway, I expected Battlefield: Bad Company 2 to have the same, huge open maps like the first game did. Unfortunately, this isn’t the case, and this is one of the main reasons I have to say that I was really let down by Battlefield: Bad Company 2. The levels in the single player campaign are smaller and much more linear – you’re just going down a single, straight path from one area to the next. Therefore the single player campaign feels and plays like just about any modern FPS, including the Call of Duty games.

For online multiplayer in Battlefield: Bad Company 2, I only played two matches and the maps in these two matches were smaller maps. However, it’s possible that the other maps may be bigger. Also, remember how I said above that I didn’t like dying every 3-5 seconds after I respawned. Well, this happened a lot during these 2 matches. It was not fun at all.

Going back to the first game, I really enjoyed playing the online multiplayer in the original Battlefield: Bad Company. In fact, I would say it’s the most enjoyable online multiplayer experience I’ve had in the current gen. I put in 40-50 hours playing it.

Battlefield: Bad Company 2, on the other hand…, well, I only played two online matches and after playing those two matches I really have no desire to play anymore matches, which is a shame, since I spent all that time downloading that huge 1752 MB patch (which I mentioned a previous post). In fact, this makes me actually want to go back and play the online multiplayer of the first game.

The second notable change is that they made the trophies more easier to obtain this time around. In fact, the single player trophies in Battlefield Bad Company 2 are a piece of cake. You can get every single player trophy, except for one, while playing on the easiest difficulty setting. The only exception is a trophy you get for beating the last level on Hard difficulty. The last level is the shortest level in the game and it’s probably the easiest level as well, so it’s not very difficult to beat it on Hard. So you can play through the entire game on the easiest difficulty setting, then use the level select to play through the last level on Hard.

So yes, you only have to play one level on Hard in Battlefield: Bad Company 2, whereas in the original game, to get all the single player trophies, you had to play through the game at least twice, including playing through the entire game on Hard.

With that said, Battlefield Bad Company 2 is still a pretty solid game, with some enjoyable moments. However, playing this game just makes me want to go back and replay the first game. And I don’t think the developers had that in mind when they made this game.

Note: Battlefield Bad Company 2 did freeze up on me once. Well, I guess the more accurate term to use is that I got an “infinite loading screen”, since that’s what happened. I tried to load up one of the levels in the single player campaign and the game froze up on the loading screen. This only happened once.