Happy New Year, everyone! Hope all of you out there had a great Christmas and New Years. I had wanted to blog more during the 2011 holiday season, but I just got busy with various things and I also took a couple of trips out of town. I will be blogging about one particular trip to Ohio in December.

After that I hopped over to a Meijer and bought Oblivion: Game of the Year Edition for the Xbox 360. 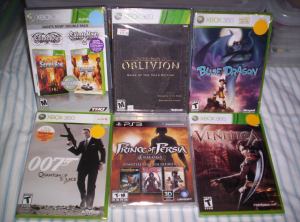 At that time I didn’t have an Xbox 360 console and for the longest time I wasn’t sure if I would ever get one (or if I was even interested in getting one). So I played Saint Rows 2 on the PS3 without having played the first game. Now that I have this Saints Row double pack, I will finally get my chance to play the first game.

As for Saints Row 2, I had an absolute blast playing it on the PS3! It’s one of my favorite action games of the current gen, and I had always wanted to play through it again. Since the Xbox 360 version has achievements, it will give me the perfect excuse to do so. Note: the PS3 version of Saints Row 2 does not have trophy support, even though the back of the red case Greatest Hits version says it does.

Being a huge RPG fan, Blue Dragon was definitely a game I wanted to pick up once I got my Xbox 360 console. It was only $10 at this Walmart, so I knew I just had to snatch it up. Yes, I have seen new copies of this game on sale (or on clearance) for as low as $5, but $10 is still a really cheap price for this game.

007: Quantum of Solace was not really on my “videogames to get” list, but when I heard a fellow gamer say that it’s based on the Call of Duty 4: Modern Warfare engine, I became interested in this game. I probably would have picked this game up for $20 or $15, but this Walmart had this Xbox 360 version for only $10!

Also for $10 at this Walmart, I picked up a game called Venetica for the Xbox 360. Now I had never heard of this game before, but the screenshots on the back of the box make the game look pretty cool and make the game look like something I can get into. The text on the back on the box says that this game is “a visually stunning cinematic RPG with a truly unique atmosphere.” Sometimes I just like to try out games I know nothing (or very little) about and hopefully these games turn out to be hidden gems. I find it very satisfying when I find these hidden gems. So for $10, I’m willing to give Venetica a shot.

The final game I bought at this Walmart was the Prince of Persia Trilogy HD for PS3 for $20. This collection contains HD versions of the three Prince of Persia games released for last gen consoles (PS2, Xbox, and Gamecube). The three games are Sands of Time, Warrior Within, and The Two Thrones. Now I had wanted to get this collection, since I had missed out on playing these three games last gen. So when I saw that this Walmart had this HD collection priced at $20, I went ahead and bought it.

After buying those games at that Walmart, I headed to a Meijer store. If you read my Thanksgiving blog post I wrote a short while back, you’ll know that around Thanksgiving time I picked up the platinum hits version of The Elder Scrolls IV: Oblivion for the Xbox 360. That version is just the standard game and does not come with any DLC. I had said that I would just play Oblivion and buy the Shivering Isles expansion later.

Well, when I saw this Oblivion: Game of the Year edition for $19.99 at that Meijer store, I just couldn’t pass it up. This edition comes with both the Knights of the Nine and Shivering Isles expansions. Since I now have this GOTY edition, I gave my platinum hits version of Oblivion away as a Christmas gift. I am really looking forward to playing Oblivion this January.

In the upcoming days I will blog about my trip to Ohio. Overall, it was a good trip, a fun trip. But the trip did not get off to a good start…